Going to church in a foreign country is a great way to meet folks—especially if your son gets over-heated and passes out in the entryway.  More on that below.

This past Sunday we accepted an invitation from Isalene George to attend Catholic Mass in Calibishie, the town where we are staying. 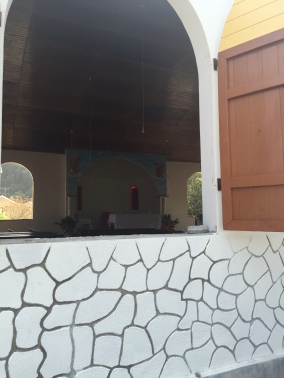 This was not your typical Catholic Mass in the U.S. For starters, we didn’t start. Punctuality is not a priority here.* The service started about 15 minutes late, and people were still arriving more than an hour later. But once we got rolling, we really got rolling. I immediately leaned over to Sarah and whispered, “these people can sing.” There was a small choir, but the entire congregation belted out each song in perfect harmony. Several people even brought their own tambourines, and lots of folks were clapping and dancing. And what made this all the more interesting was that the songs were traditional hymnals that I remembered as a child listening to at Catholic Mass. It was awesome.

At least, I thought it was awesome, but I also like marathon running. What the congregation lacked in punctuality, they more than made up for in endurance. The Mass lasted a wee bit over three hours. And it was hot and crowded. About an hour in, Jimmy told Sarah that he needed some air and left to go outside. A few minutes later, a couple of boys came to our pew and whispered to Sarah, “your boy fell down.” Sarah scrambled outside to see an ashen faced Jimmy. He had passed out and the boys had helped him back to his feet. After a bit of reviving, he declared that he was good to go, and returned to his pew. As you might expect, we are now known in town by this event. Maybe Jimmy will like marathons like I do.

A parish Deacon led the Mass rather than a Priest since they are in short supply. The message had a lot that was familiar to my Catholic upbringing, but it was also very different in many respects. He talked about not having food to eat, about needing more male leaders (attendance was probably 90% female), and of Boko Haram in Nigeria, something that isn’t even on the radar for most people in the U.S. even though thousands have died there in religious clashes. Contrast that with the horrible attack in Paris that killed twelve.

The end of the Mass was also quite different. The parish bulletin was handed out to those that wanted it, and a man then read aloud each and every word of the bulletin to the congregation. I believe this was done because some members could not read it themselves. Every child goes to school now, but I don’t believe this was always the case. It made me appreciate our education system and teachers in the U.S.

At the very end of the Mass, we were invited to stand as visitors and the congregation sang a song welcoming us. And we then filed out into the busy street along the bay. Everyone was in his or her Sunday best. 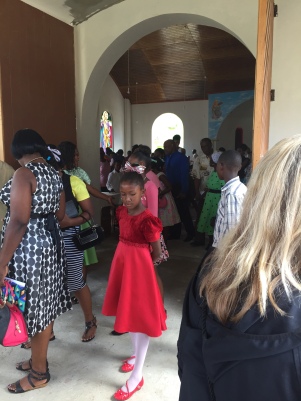 Lots of people gather for a drink or meal after church, and we were invited up the hill to Isalene’s home for post-church refreshments. Isalene walks everywhere, as many in the village go without a car. The drive went up, up, up the hill above town. I was tired just driving the narrow winding road. Isalene walks it everyday, unless she is able to hitch a ride, which is very common.

We met her husband and brother and more of the extended George family that all lives close together up on the hillside. We had coconut milk and a tour of the neighborhood. And as we were getting ready to leave, we recognized two or three elderly (+70) people from church that had walked up the hill and were just arriving back home. No wonder Dominicans live so long and look so young. 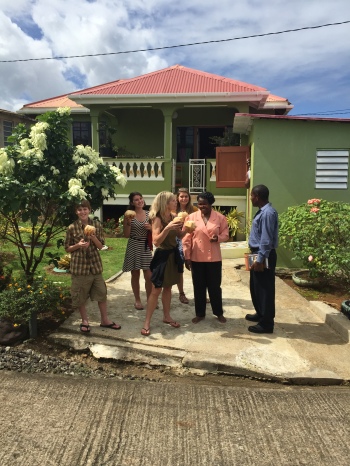 It was a great way to start our visit here, as we now recognize many people in town and they recognize us and say hello and chat. One thing I’ve realized from traveling is how welcoming people can be if you simply make an effort to learn and respect the way they live rather than try to dictate your own. A little respect goes a long way, especially on Dominica.

*I struggle with punctuality, so I’m not casting stones.

3 thoughts on “Your Boy Fell Down”